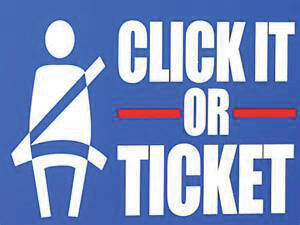 Seat belts can reduce the risk of injury or death in a crash by 50%, yet more people are choosing not to wear one in the state and nationwide.

It’s a concern that the Seymour Police Department is working to address by participating in a three-week enforcement campaign: Operation Belt Up.

Officers will be out in greater numbers enforcing seat belt and child passenger safety laws. This high-visibility enforcement effort is intended to reduce injuries and fatalities by ensuring that all motorists and their passengers are buckled up.

Operation Belt Up is funded by the National Highway Traffic Safety Administration through the Indiana Criminal Justice Institute.

“We’re losing far too many people over something that’s so easily preventable,” Seymour Sgt. Michael Cooper said in a news release. “Seat belts are your best defense in a crash. Not wearing one because you were ‘only going a short distance’ or ‘just forgot’ could end up costing you your life. Always buckle up.”

After several years on the rise, Indiana’s seat belt use rate has fallen to its lowest level since 2016, currently at 92.9%, according to an observational survey conducted by ICJI. Tragically, of the total number of vehicle occupants killed in crashes so far this year, more than 40% (252 of 588) were not wearing seat belts.

Drivers under the age of 34, particularly young male drivers, were the most likely out of any age group to be found unbuckled.

“We’ve seen some troubling trends on the road since the start of the pandemic, but this one is especially concerning,” said Devon McDonald, executive director of the ICJI. “The evidence is clear that seat belts save lives. It takes two seconds to put on and is one of the safest decisions drivers and passengers can make.”

Indiana has a primary seat belt law, which means law enforcement can pull someone over and issue a ticket just for not wearing a seat belt. Drivers also can be cited for each unbuckled passenger under the age of 16.

The law requires everyone in a vehicle to be buckled up. Children under 8 must be properly restrained in a federally approved child or booster seat. From 8 to 16, children are required to be in a booster seat or can wear a seat belt, depending on their size.