Last week at Crothersville High School, the athletic department was given a $5,000 check from the Indianapolis Colts and UnitedHealthcare.

Crothersville earned it when athletic director Jacob Dunn saw a link for it on Twitter and decided to apply. This happened around October of last year, and he found out Crothersville was selected as a winner around the middle of December.

Olivia Cain, a fifth grade teacher at Crothersville Elementary School, called Dunn and said she wanted to tell him something.

“So I went down and she told me she received a voicemail telling her that she was selected as a winner and Crothersville Athletic Department was selected as the week 8 winner (10 total winners),” Dunn said.

In addition to the grant, Cain was given four tickets to the Colts-New England Patriots game on Dec. 18, as well as an autographed helmet with VIP tickets for tailgating.

For Dunn, he got two suite tickets to the Colts-Las Vegas Raiders game on Jan. 2 of this year. Dunn went to the game with track and field head coach Marc Bowman, and the two were able to enjoy free meals in their suite, which just so happened to be next to the suite of Raiders owner Mark Davis.

Dunn and Bowman were able to grab a photo with Davis, and also got other items such as a mini Colts helmet, scarf and beanie hat.

“It was just a cool experience,” Dunn said.

It was last Friday where Dunn was joined by Cain, Principal Dr. Doug Ballinger and Superintendent Dr. Chrystal Street to accept the $5,000 check from Scott Thompson, director of sales for Indiana/Kentucky UnitedHealthcare.

“The money will go to the athletic department and will go towards equipment for our sport teams,” Dunn said. “It will have a big impact on our school and athletes because it will go towards improving our equipment in a good and safe way.” 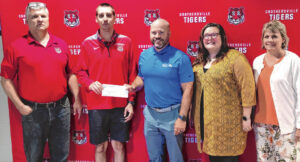 Dunn noted another reason why the money was nice to receive was because his first two years as athletic director at Crothersville were impacted heavily by COVID-19, so this was a nice bonus to help salvage some of the funds the school couldn’t receive with ticket sales and other things influenced by the pandemic.

This is an annual thing that the Colts and UnitedHealthcare do, and Dunn said he’ll have to check to see if there’s any restrictions for past winners applying again.

“If they have no restrictions, then I will share the link to try to win one of the 10 spots again,” Dunn said. “As for other funding opportunities, I ended up sending some information in for the Bill Belichick foundation for a $10,000 grant. It was due this summer and they were supposed to let us know in December. I received a letter in February saying that with the pandemic they had a large number of applicants and we weren’t selected. It was a $10,000 grant and we had to send in information about what we would use the funds for if we won the money. I may apply for that one again this year.”