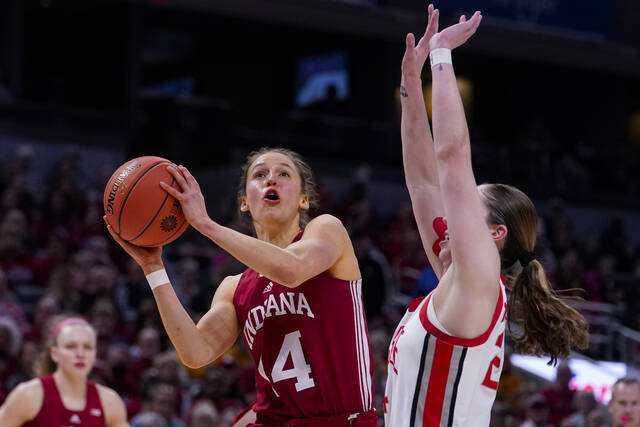 INDIANAPOLIS — There were moments it seemed as if Indiana had it figured out, just how to take down Iowa for the Big Ten tournament championship.

But it was just too tall a task for the Hoosiers to capture four games in four days at Gainbridge Fieldhouse, three of them over nationally ranked teams.

Sunday was a fight to the final buzzer, but for the third time this season, Iowa bested Indiana, 74-67, this time with higher stakes than during the regular season.

The Hoosiers are 22-8, after beating Rutgers, No. 10 nationally rated Maryland, and No. 13 rated Ohio State here over the week, but the 14th-ranked team in the country will have to wait until Monday to see where it sits in the new ratings.

And IU will have to wait a week to learn where it fits into the NCAA tournament’s plans for seeding and a possible home game for later in March.

Guard Caitlin Clark (18) and center Monika Czinano (30) could not be contained, the sturdy, 6-foot-3 Czinano in particular, though Clark is normally the deadlier shooter. Czinano made 13 of 18 tries this time.

“She puts so much pressure on you,” said IU coach Teri Moren. “Half the time she doesn’t even dribble. She shoots the ball so fast.”

And from five feet or less, overpowering defenders.

This was a tug-of-war for a long time before 8,709 fans, well-represented in the stands by the two partisan groups.

Although she ultimately fouled out, Grace Berger made many of the biggest shots for her 20 points. Guard Nicole Cardano-Hillary (19 points) was her usual pesky self on defense.

“We were confident we could get looks and the looks we wanted,” Berger said.

There were suggestions the four straight days of tense play wearied IU, but Berger denied it and indeed, Moren has employed a short bench all season, so the Hoosiers are used to competing for long minutes.

“No, I don’t think so,” Berger said of getting tired. “I think we’re in better shape than any team in the country.”

In high-octane games near the end of the regular season, Iowa defeated IU twice, 96-91 and 88-82. This time the Hoosiers put more defensive pressure on the Hawkeyes to keep the score down, but still could not pull off the hat trick of topping three ranked teams in three days.

Saturday, IU ousted No. 1 seed 23-6 Ohio State, 70-62, behind five double-figure scorers, That was tricky because starting frontcourt regular Aleksa Gulbe was ill at the beginning of the game and didn’t appear until late.

Plus, Kiandra Browne, often one of the first players off the bench, was nursing a sore hip and mostly only watched. She wasn’t even in uniform for the Rutgers game.

“That’s when we’re at our best,” Patberg said of sharing the ball. Patberg was sharp on long-range shooting at the start of the tournament, but not Sunday.

The last time IU won the league’s tournament title was 20 years ago and the program is hungry for that.

“Our goal was to be here till Sunday,” Moren said.

To win, Sunday, as well. The Hoosiers entered the tournament off a slumping 1-4 regular-season-concluding stretch, trying to work Holmes back into top shape after missing a month of games with a knee injury, and after the team was sidelined 15 days with COVID-19.

“Obviously, they’re disappointed,” said Moren of her players, who had tears in their eyes in the post-game huddle before leaving the floor. “But I don’t want them to be discouraged. I think they’re one of the best teams in the country.”

So is 23-7 Iowa. Clark pumped in 41 points Saturday in the Hawkeyes’ semi-final win over Nebraska and IU could never slow Czinando.

“She’s one of the best post players in the country,” Berger said. “She’s hard to stop.”

Iowa coach Lisa Bluder is impressed the Hawkeyes could beat IU three times since Feb. 19. She called the tournament triumph “the most amazing feeling.”

Moren said the let-down would be keener if the season was over, but the Hoosiers know they will be on the NCAA tournament invite list when the brackets are announced next Sunday.

Nearly 300 other Division I teams will not be welcomed into the NCAAs.

Due to their run in the Big Ten tournament, the Hoosiers can legitimately hope to host early games at Assembly Hall in that other tournament.

“I do think we positioned ourselves to host,” Moren said.