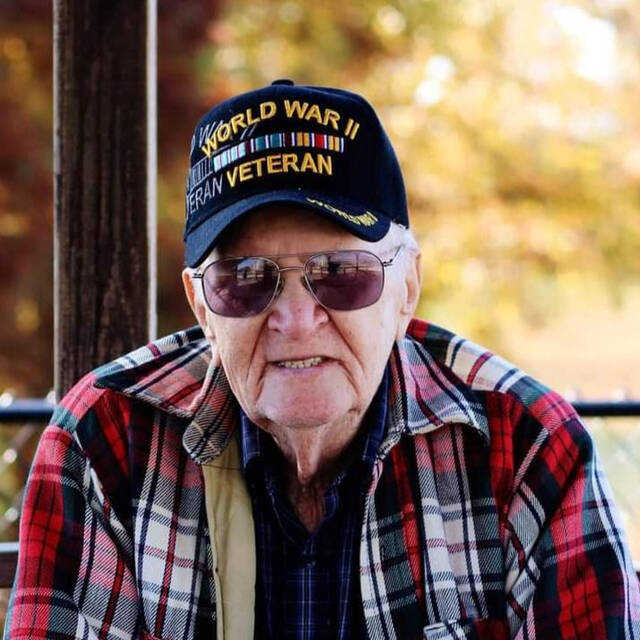 Harley D. Thompson, of Medora, passed away peacefully at his son’s home on the night of January 17, 2022, surrounded by his loving family. He was 95 years old.

Harley entered this life in Washington County, Indiana on April 4,1926. He was one of seven children born to the loving parents, Harry, and Amanda (Holsapple) Thompson. Harley grew up in Washington County. He went to Salem Community Schools and after 3 days into his sophomore year, he decided to graduate early and go to work with his dad on the farm until he decided to serve in the US Navy. Harley went on to fight in the Pacific Campaign of World War II. He served on the USS LSM(R) 405 aka USS Broadkill River. After his service, Harley came home and met the love of his life Margie (Reynolds) Thompson. They were united in marriage on May 8, 1947. From this 72-year union, Harley and Margie were blessed with four children, Denver Dale, Harold Alan, Brenda Reve, and Robert Kent. Margie preceded on September 15, 2019.

Harley was also a hardworking man. He went to work for Arvin’s in Columbus and retired after 28 years. His retirement did not last long, and he went back to work for Cummins Engine for over ten years, until he wanted to retire again.

Funeral Services will be conducted on January 22, 2022, at 11:00 at Hague Funeral Home of Medora with Pastor Skip Breeden officiating.

Masonic Funeral Rites will be conducted at 7:00 pm on Friday January 21, 2022, at Hague Funeral Home.

Memorials may be written in Harley’s name to “Hope” Medora Goes Pink or the Carr Township Conservation Club through Hague Funeral Home.