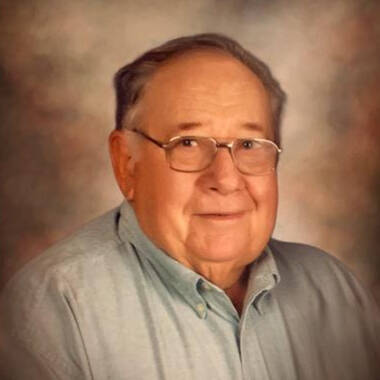 Francis H. Elliott, 85, of Brownstown/Tampico, IN, went peacefully to his eternal home to be with his beloved Lavonda on January 1, 2022, at 6:01 PM at IU Methodist Hospital in Indianapolis, IN with the presence of his 3 daughters, Janette, Kim, and Lee Ann by his bedside. Francis was born in Brownstown, IN, on Wednesday, February 19, 1936, to Richard Harvey and Nora Ethel (Johnson) Elliott. Francis was a 1954 Tampico High School graduate and attended Purdue School of Agriculture short courses in Dairy Production. Francis was drafted in the United States Army and served at Fort Wainwright in Fairbanks, Alaska. On September 22, 1961, at West Point United Methodist Church in Salem, IN, Francis married his best friend and wife of 57 years, Lavonda Joyce (Pollock) Elliott. Francis was born and raised on the dairy farm that his mother, Nora Ethel (Johnson) Elliott was the founder of in 1932 where Ethel’s parents had cows at their Tampico home. Francis, along with his brother, Harry, ran the farm their entire lives along with help from their spouses, children, and grandchildren. It was truly, a family affair. He was proud of his dairy background and was a promoter of the dairy industry. For many years, the Elliott’s provided tours for school-age children and church youth groups by hosting and giving educational tours about the dairy industry. At the end of the tour, the kids were rewarded with, can you guess? Milk and cookies. He was a firm believer in hard work and worked hard his entire life on the farm. The Elliott farm was one of the longest-running dairy farms in Jackson County and was in its 4th generation of operation before milking production stopped in February of 2021. The farm was a member of the Dairy Herd Improvement Association and has been recognized with numerous Indiana state achievement awards, Foremost quality awards, along with quality awards of production, having several top production cows producing over 100 lbs. of milk per milking per day. The Elliott farm milked with both, Holstein, and Jersey cows. Francis was a selfless, generous, quiet, and well-respected man. He was always willing to give a hand up to those that needed it and never said anything, unless it was of great importance. He was a member of Tampico Baptist Church and most recently attended and supported the First Baptist Church of Crothersville. He was a supporter and advocate of the Jackson County Fair and 4-H where he volunteered many countless hours and served on the Jackson County Fair Board from 1976 until the present. Elliott Farms has been exhibiting at the Jackson County fair for 82 years. He was a member and served on the Jackson County Farm Bureau Board of Directors where he was instrumental in starting the Farm Bureau ice cream dipping booth at the fair. He served for 38 years on the Jackson County Plan Commission and Board of Zoning Appeals, for many of those years he served as chairman and was also on the Jackson County Co-Op Board of Directors. He was a member of American Milk Producers Inc. where he served on the board of directors and American Holstein Association for 49 years. Francis was a lifetime member of the NRA. He lived, ate, slept, and breathed the farm life, so it was just natural for Francis to start collecting John Deere tractor memorabilia and have one of the biggest collections around. Francis is survived by his 3 daughters, Janette Kay Elliott of Brownstown, IN, Kimberly Sue (Kevin) Hackman of Brownstown, IN, and Lee Ann (Monty) Silence of Seymour, IN, 4 grandchildren, Nora (Joe) Titzer of Booneville, IN, Kara Ellerman of Brownstown, IN, Spencer Silence of Seymour, IN, and Zackary Ellerman of Brownstown, IN, 1 brother, Harry (Rita) Elliott of Brownstown, IN, nephews, Brian, Bruce, Gregg Elliott, nieces, Lynnett Larison, and Trish Moss. He was preceded in death by his parents, Richard and Ethel Elliott, and his loving wife, Lavonda Elliott on July 18, 2019. Pastor Jon Pearce and Andy Schroeder will conduct funeral services on Friday, January 7th, 2022, at 11:00 AM at the First Baptist Church of Crothersville, 305 E Howard Street, Crothersville, IN 47229 with burial to follow at Crothersville Cemetery where military rites will be conducted. Visitation will be from 3:00 PM until 8:00 PM at Adams Family Funeral Homes &Crematory-Crothersville on Thursday, January 6th, 2022, and from 9:00 AM until the time of the service on Friday at the church. Memorial gifts may be given to the family to distribute to all of Francis’ charities that he was fond of and supported, c/o Adams Family Funeral Homes &Crematory, 110 E. Howard St., Crothersville, IN 47229. Online condolences may be given to the family and viewed at www.AdamsFuneralHomeonline.com.