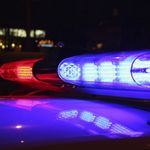 Brandy Morgan, 42, Mitchell, possession of methamphetamine, driving while suspended with a prior suspension within 10 years, no bond, 11:28 p.m. Monday.

Brandeon Leeandre Smiley, 35, Indianapolis, possession of a firearm by a serious violent felon, possession of marijuana with a prior conviction, no bond, 1 p.m. Monday.

Property damage wreck involving a vehicle in a ditch and into a fence, 1000 block of East County Road 600S, Brownstown, 8:37 p.m. Monday.

Female yelling and going in and out of traffic, Tipton Street at Burkart Boulevard, 12:28 p.m. Monday.

Female possibly under the influence lying on the ground in a parking lot, 200 block of North Sandy Creek Drive, 7:53 a.m. Monday.

Property damage wreck involving a motorist in a box truck that was stuck in a yard, Thomas Street area, 7:03 p.m. Monday.