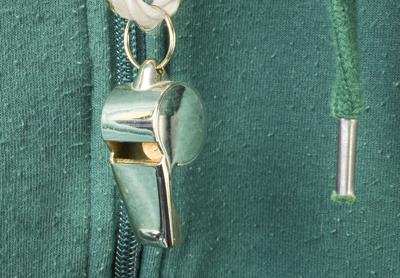 With two minutes remaining in a game, a basketball player pulls down a rebound.

In a tangle of bodies, an elbow to the head knocks him to the floor.

The referees recognize the collision and immediately stop play. The crowd goes silent.

Kyle Coates, a certified athletics trainer from Schneck Medical Center, rushes to the floor and inspects the athlete.

As the game resumes, Coates works through a series of steps to assess whether the athlete can return to the action.

His decision will not shaped by a desire to win the game. It’s about long-term health and safety.

“The first thing we do, usually when someone takes a blow to the head from another player or the floor, is we will recognize they’re stunned or dazed,” Coates said. “The IHSAA has a law now that the referees can pull a kid out if they think there’s some kind of head injury. Even if they get hit and don’t seem dazed, we will always check the athlete out.”

A number of symptoms can occur when a head injury occurs in any sport.

“If (an athlete) says they have a headache, are dizzy or see stars, we will immediately remove them from play,” Coates said. “We then take them through a sideline concussion test. We look at balance, coordination, short- and long-term memory, proprioception (sensory examination) and pupil dilation and write them down. If they’re unconscious for any period of time, we obviously take them out without questions.”

With the recent advancements in neurological technologies and concussion management education, athletics trainers are making a push to provide the safest and most efficient treatments when dealing with head injuries.

Traditional methods have taken a backseat in recent years.

Kyle Coates, Lance Tape and Kelli Hacker, certified athletics trainers who work for Schneck, work on the sidelines for the schools. After diagnosing a concussion, the athletics trainers send an injured athlete to Dr. Matt Meyer, a neurologist at Schneck.

Meyer has equipment that can fully assess a concussion internally, beginning what can be a lengthy process for an athlete to return to play following a concussion.

“They need to see a physician to be cleared to play,” Coates said. “Indiana law says that it can’t be a nurse practitioner or a physician’s assistant. It has to be a doctor trained in concussion management to allow an athlete to play again. The law is kind of vague because it doesn’t really specify what being trained in concussion management means.”

Meyer, who is a part of the Indiana Concussion Network, is one of the leading doctors in concussion management in the area.

Before the start of the season, all athletes in contact sports at Brownstown Central and Seymour are required to take a baseline concussion test — a process called imPACT testing — so Meyer can compare brain scans if an incident occurs.

“(Meyer) has the ability to test them not only neurologically as a physician but with the imPACT test — which uses a computer to compare to a baseline,” Coates said. “All the kids in contact sports in Seymour and Brownstown Central go through the test. We also offer it to athletes who aren’t in contact sports.”

The imPACT test has emerged as one of the best means to help treat concussions.

“They had never done the imPACT testing before,” Coates said. “I think educating the parents has helped, too. We meet with the parents and athletes in all the team sports in the beginning of the season. We talk about all the injuries but have a large focus on concussion management. I think we do a good job of managing them. Sometimes it’s hard to prevent them, especially in sports with protection like a helmet. In the past, I don’t think there was a protocol in place, so each doctor had their own practice.”

This past fall, Coates and Hacker reported six concussion incidents at Brownstown Central and six at Seymour. The two trainers alternate schools depending on the sports season.

Right now, Coates and Tape are on the scene while Hacker is on maternity leave.

Recognizing the seriousness of concussions, Seymour has its own protocol on top of IHSAA regulations to ensure players safety.

“We have a written protocol at Seymour to allow an athlete to return after a concussion,” Coates said. “(Athletes) have to follow a step-by-step process that’s usually written by Dr. Meyer. The IHSAA also has a form, for consistency, that states a detailed process. It’s the safest way to get back.

“In the past, we would wait a week or two and say they can go back. Now, we are gradually adding more exercise to test.”

One of the most important steps that the trainers have taken in raising concussion awareness has been through meetings with parents and athletes before the beginning of the season.

“Parents sometimes didn’t used to take it as seriously, but now I think they know there is no messing around,” Coates said. “They can’t talk us into bringing a kid back in. That’s what we tell them during the coaches meeting: There’s no negotiating.”

Not all schools have athletics trainers on site for athletics. Most of these schools didn’t report their concussions to the IHSAA voluntarily after the fall sports season.

“The National Athletic Training Association is making a push that all schools have trainers, especially schools that have football,” Coates said. “Football coaches now have to go through a training. It comes down to the officials, coaches and players knowing they need to be evaluated. There is something called second impact syndrome where you can get a concussion on top of another concussion. That’s where we see a lot of severe, long-term issues.”

If a concussion goes undiagnosed, there are many mental health issues that can arise down the road, such as depression.

Despite all the current methods and advanced technology, concussion management is still undergoing heavy research.

Thus far this winter, no athletic-related concussions have been diagnosed in athletes at county high schools. There were three concussions last winter, Coates said.

As a part of a voluntary study on concussions, the IHSAA released the school’s that reported the highest number of concussion incidents for the fall 2013 sports season.

Jackson County schools had a relatively low number of concussions for the 2013 fall sports season.

Step 1: May participate in light activity. (10 minutes on an exercise bike, walking or light jogging; but no weightlifting, jumping or hard running)

Step 2: May participate in moderate activity. (Moderate intensity activity on an exercise bike, jogging, or weightlifting with reduced time and/or less weight than normal)

Step 4: May return to practice and full contact in a controlled practice setting.