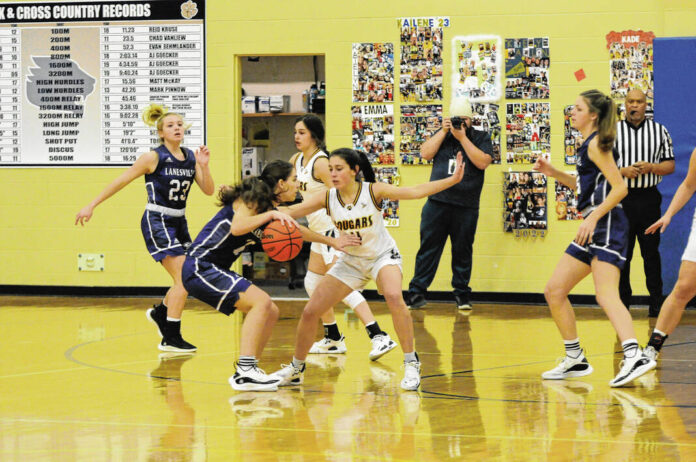 The Trinity Lutheran girls broke a 2-2 tie with five straight points early in the first quarter, and led the rest of the way to defeat Providence 63-51 Tuesday night in the Bollinger Athletic Complex.

Madison Keith scored on an old fashioned 3-point play, and Bailey Tabeling followed with a layup that put the Cougars on top 7-2.

Trinity coach Mike Lang said before the game he wanted his team to come out aggressive and gain some separation from the Pioneers, and that is exactly what they did.

After the Pioneers closed to 7-5, Tabeling and Laura Roeder scored on moves to the basket, and Liza Froedge added a free throw for a 12-5 score with 1:32 left in the opening period.

Roeder hit a 3-pointer to close the first period at 15-7.

Tabeling stayed hot with nine points in the second period to help the Cougars increase their lead to 29-14 at the half. Trinity shot 10-for-19 from the floor and the Pioneers were 4-for-24 in the first 16 minutes.

A basket by Tabeling early in the third period pushed Trinity’s lead to 33-19 before the Cougars’ offense stalled and the Pioneers cut the difference to 36-30 on a 3-point play by Avery Smith.

Tabeling came back with a 3-pointer as the Cougars outscored the Pioneers 12-5 over the final 2:40 to take a 48-35 lead into the fourth period. Jordan Brewer scored eight points in the third quarter.

Froedge scored nine points in the fourth period and finished with 10, while Keith, Roeder and Jordan Brewer scored nine apiece.

Trinity finished the game shooting 22-for-41, and had a 41-25 advantage in rebounds. Jordan Brewer had two 3-pointers for the Cougars, and Tabeling and Roeder each had one.

The Cougars (2-1) will host Southwestern Shelby at 6 p.m. Saturday.