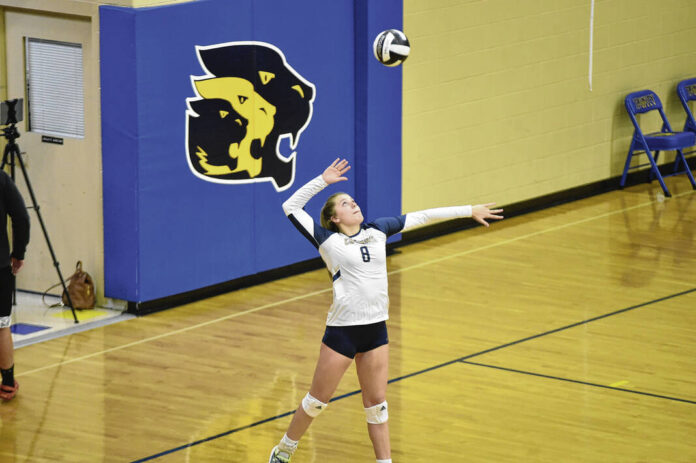 On Thursday night inside Bollinger Athletic Complex against Hauser, the Cougar coach saw a much more energized group, which resulted in a 25-17, 25-14, 25-14 victory over the Jets.

“A lot better focus and serving,” Wilder-Newland said. “We missed twelve serves on Tuesday, but we came out and really served well tonight. We only missed four serves on the whole night.”

The first set was tight between both teams to start. Trinity had the advantage out of the gate, but a 4-0 Hauser run gave the Jets an 8-7 lead and Wilder-Newland called timeout.

Her team responded from there. Trinity gained a 16-14 advantage, extended that to 22-17 before Carson Bowling got a kill to end the set 25-17. Bowling was honored before the match for picking up her 500th career kill in Trinity’s last outing.

In the second set, it was Hauser that got off to a good start. Kayden Miller served an ace that gave the Jets a 7-2 lead.

The Cougars continued to roll from there, winning the set 25-14 after Ava Blomenburg sent an attack across the net and Hauser had a passing error.

“We were not passing the ball very well,” Wilder-Newland said on her team’s slow start in the second set. “We had a couple communication errors, so once we got past that and just started chipping away, it was much better.”

As the third set was tied at eight, Trinity used a 6-0 run behind the serving of Bailey Tabeling and Lila Hunter to gain the advantage in the set.

An ace from Drew Hubbard ended the third set 25-14 to complete the sweep for the Cougars.

“We wanted to be able to get some of the younger kids in and get them experience,” Wilder-Newland said. “(Freshmen) Maddie Adams and Lila Hunter came in and both served well.”

Leading the Cougars were Tabeling with 18 kills, Bowling had 13 and Hubbard had six. Bowling had three blocks while Tabeling and Laina Klinge each had two.

Laura Roeder and Adams both served two aces, and Addison Darlage had 36 assists.

The Cougars will next play Mitchell and New Washington at home on Saturday in two best-of-three matches.