NOBLESVILLE — The Brownstown 7U All-Stars were behind the backstop counting down the outs the Seymour 7U All-Stars needed to defeat Newburgh.

Brownstown already was in the championship game at the Field of Dreams in Noblesville, but Seymour still needed one more win to get there, and Brownstown wanted to see its fellow county members make it.

Seymour had a 12-5 lead over Newburgh in the third inning before a weather delay paused the game for an hour. If play wasn’t able to resume Sunday, the tournament would’ve ended with Newburgh placing first since they were the No. 1 seed, Brownstown finishing in second and Seymour third.

Luckily, the game resumed, and Seymour staved off a Newburgh comeback to win 15-13 and get into the championship against Brownstown.

“They battled back into it, and we held on just enough,” Seymour head coach Jacob Toppe said.

Toppe and McCrary are stepbrothers, so it was a special moment for both of them to reach the title game against one another.

As the 7U All-Stars squared off, it was Brownstown that got the best of Seymour, winning the game 16-4.

“Very excited,” McCrary said. “As much respect as we have for those coaches, and they have a great group of boys over there, it’s always fun when Brownstown beats Seymour. If we’re not playing Seymour, we’re rooting for Seymour.”

After Brownstown received its first-place rings and Seymour got its second-place ones, the two teams came together for a group photo at home plate. 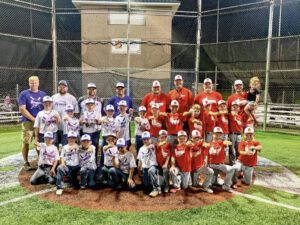 “It was neat that we were playing Brownstown out of all teams in it,” Toppe said. “We brought all the rings back home to Jackson County. It was awesome. Kyle and Chris (Lambring) do wonders over there. It’s a lot of fun. Those kids are really good kids.”

For Seymour, the run to the title game wasn’t in its favor to begin Sunday. Seymour went 0-2 on Saturday, seeding them in 12th place to start competition Sunday.

The first matchup was against No. 5 seed Bartholomew County, which won both games on Saturday. Seymour beat Bartholomew 24-16 and advanced to play the No. 4 seed, Plainfield, and Seymour won that game 12-6. That led to the thrilling win over No. 1 seed Newburgh before taking on Brownstown in the championship.

“We started out 0-2, and we went back Sunday, showed up at 10:30, went to the batting cages, corrected a few things and just talked to the boys about having fun,” Toppe said. “I think my exact words to the boys were, ‘Yesterday wasn’t much fun. I didn’t see any smiling faces. We weren’t out there having fun doing what we do.’ We talked to them and changed their mindset. Nobody believes we can do it, so let’s just show everybody the team we are and why you guys got selected to be on the all-star team.”

This marked the second straight year that Brownstown won the All-Star series championship.

“That made it special,” McCrary said. “Every one of them was on the team last year, so being able to repeat was great.”

Both McCrary and Toppe stressed the importance of making sure their teams had fun while out on the field.

Toppe allowed his team to come up with its own chants, and the Seymour boys decided to chant “dingers and cookies” in the dugout. It also was Brody Allman’s birthday, so they made his walk-up song “Happy Birthday” and tried to make everyone laugh with goofy walk-up songs.

Toppe coaches the Seymour Diamondback team, and every player on the All-Star team except one also plays for the Diamondback program.

As for McCrary, he coaches Brownstown Impact, and every player on the All-Star team also plays on the Impact.

“They don’t know yet how to handle adversity, so whenever another team has success against you, which it will happen, you see them get upset,” McCrary said. “You‘ve got to find a way to relay to them that the other team is going to make plays, as well, and how do we respond to that? But it’s very fun coaching these young guys… Just go out there, play baseball and have fun.”

The joy and sportsmanship from both the Seymour and Brownstown 7U All-Stars were on display all weekend, and their play on the field allowed all of the All-Star hardware to come home to Jackson County.