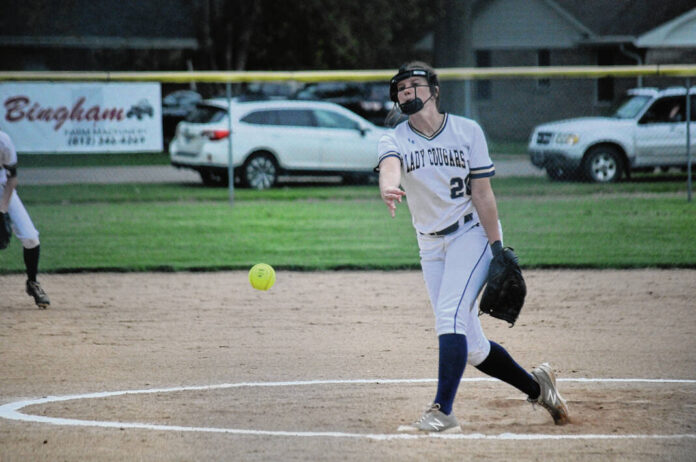 By Arv Koontz | The Tribune

The win advances the Cougars (12-8) into Friday’s 5:30 championship game against New Washington.

After the teams battled through two scoreless innings, Gross opened the third inning with a home run over the fence in left field. She said it was her third homer of the season and it felt special, “Especially since the last few games my hitting has been off. Getting a home run is amazing during sectionals.”

The Cougars added runs in the next four innings in beating Henryville for the second time this season.

Bailey Tabeling tripled to drive in a run in the fourth, Olivia Cain had an RBI single in the fifth, Gross had an RBI double in the sixth and Amanda Finke and Tabeling drove in runs in the seventh.

Cougars coach Bob Tabeling said this win came a little easier than the Cougars’ win over the Hornets earlier this season.

“Every time we play Henryville it’s a good game,” he said. “We played them three times last year. A couple of those were 1- or 2-run games. We played them earlier this year and it was tied going into the seventh, so it’s nice to get a good, solid win.

“Kamzi did a great job in the circle and at the plate. You set it up for your seniors to have those kinds of days and she had a remarkable day today. That is probably the fifth time that Kamzi has pitched against that

group of girls. She held them off, getting ahead, throwing strikes, mixing in her pitches.”

Trinity did not have any errors and the Hornets committed six errors.

Gross had three hits, Tabeling and Madison Keith two each, and Ally Russell, Cain, and Dianna Munoz one hit each.

Gross had a two-hit shutout until Autumn Osborne hit a 3-run homer in the bottom of the seventh.

Gross allowed five hits, she walked one and had five strikeouts.

The Seymour softball team played its sectional game at Floyd Central against the Highlanders on Tuesday night, but because that was the later game and New Albany and Jeffersonville went nine innings before them, results for the Owls were unavailable at press time.

Results will be featured online at tribtown.com and in Thursday’s Tribune.

The Seymour tennis team suffered a 3-2 defeat to Bloomington North at Bloomington High School South on Tuesday in the regional semifinal.

Even though Seymour’s season as a team has come to an end, because Schafstall won her match at one singles, she will continue on as an individual in the singles postseason bracket.

The Crothersville baseball team had a close game against Indiana Washington on Tuesday night, but fell just short 9-5.

Lucas Hilton led the Tigers with three hits on the night while Caden Lewis, Ian Tatlock, Devin Morgan, Logen O’Sullivan and Dirk Crater all had one hit. Tatlock had three RBI and Crater had one RBI.

The Tigers will play against New Washington on Friday in a sectional game at Shawe Memorial.

The Trinity baseball team beat Shawe Memorial 5-4 on Tuesday to win its sixth game in a row.

Kowan Gross started and Nathan Voelker came in to relieve him and got the win. Peyton Pollert, Evan Hunt and Luke Coomler all had RBI in the game.

The Cougars are now 9-18 and have a lot of momentum heading into sectionals on Monday against Jac-Cen-Del.

The Seymour boys golf team had its best round of the season on Tuesday as the Owls hosted Providence and HHC champion Bedford North Lawrence Stars.

The Owls will be competing in the Jennings County Invite this Saturday.

Caiden Gwin was a medalist with a round of 41. Chandler Stahl shot a 42, Matthew Reedy and Smith Hackman both shot 43s, Elix Preston shot a 44, Jaren Cunningham 46, Caden Waskom 47, Connor Gwin 48, Cole Brelage 48 and Carson Darlage 50.

This was the Braves’ final regular season match before sectionals in June.